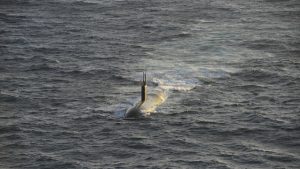 The United States Navy is developing a hybrid Lidar-Radar system to see and communicate under water. A team of researchers at the Naval Air Warfare Center Aircraft Division (NAWCAD) is working on technology, which uses a laser to carry radar signals through the water. The system’s hardware can be used for both sensing and communicating, so sailors will be able to use it for object detection and wireless communications.

Although radar technology works well on land, it is too weak under the ocean, because radio frequencies experience high attenuation in water. For this reason, the Navy usually uses sonar to identify potential threats under water, but acoustic technology has several drawbacks. It doesn’t produce high-resolution images, it lacks the bandwidth needed for wireless communication, and signals can’t travel beyond the ocean’s surface. By combining radar with light-based Lidar techniques, well-established radar techniques that were previously only possible on land can now be used under the ocean.

This hybrid technique was actually first described in a patent (“Modulator Lidar System”) back in 1998. Now, the team at NAWCAD is conducting ongoing research that includes characterizing water’s optical properties (e.g. scattering, absorption), performance prediction modeling, and validating their predictions by conducting experiments with prototypes.