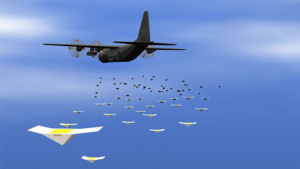 Inspired by swarms of insects, researchers at the Naval Research Laboratory have developed a simple drone to fly in hordes that are too numerous for an enemy to shoot down. Close-In Covert Autonomous Disposable Aircraft, or CICADA, are the smallest and cheapest drones the military has ever developed. From a distance they are indistinguishable from birds, so the sneaky drones can be used to provide key intelligence information, such as environmental conditions or what kind of vehicles are using a road. They were displayed at the Pentagon’s “lab day” last week, an event to showcase defense technology.

The researchers have described the disposable unmanned vehicle as being essentially a flying circuit board. One CICADA fits in the palm of your hand, and 18 can be contained in a six-inch cube. Each tiny drone is equipped with GPS, a built-in microphone, and sensors. Although the Navy has other complex technology, this particular drone was designed to be simple and efficient. It only contains 10 moving parts and does not have cameras or engines, which would compromise the minimalist design by being too bulky and costly.

Despite not having an engine, the CICADA can be directed to land within a few feet of a target. The GPS receiver tells it where to land, and the drone adjusts it wings and rudder accordingly. In test flights, the drone was released from 57,600 feet and landed within 15 feet of its target. They are surprisingly indestructible. The prototype cost only a thousand dollars, and full-scale production models would be just $250 each. In the future, hundreds of small, plastic drones could be dropped off in a flight and left to scatter across hostile territory without directly over-flying those regions or exposing human agents on the ground.