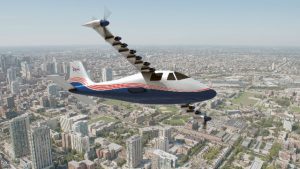 NASA has released new details about an experimental aircraft that is part of the agency’s reinvigorated X-Plane program. On June 17 at Aviation 2016 in Washington, NASA Administrator Charles Bolden described the agency’s latest experimental electric airplane, the X-57. The plane has been nicknamed “Maxwell,” to honor James Clerk Maxwell, the 19th century physicist who pioneered electromagnetism and wrote Maxwell’s Equations.

The aim of the project is to demonstrate and accelerate aerospace technologies that reduce fuel use, emissions, and noise. The Maxwell will be built by modifying an Italian-designed Tecnam P2006T twin-engine light aircraft. Its wing and gas-fueled piston engines will be replaced with a long, skinny wing embedded with 14 electric motors. Twelve motors will be positioned on the leading edge for take offs and landings, and larger motors placed on each wing tip will be used for cruising. NASA engineers hope that the Maxwell will prove that distributing electric power across several motors in an aircraft will make the plane consume five times less energy than conventional designs.

This high energy efficiency at cruising altitude will reduce flight times and, according to NASA, should also reduce overall operational costs for small aircraft by up to 40 percent. Maxwell will be powered exclusively by batteries so there will be no carbon emissions. Its electric motors will be much quieter than piston engines, which will make flights more pleasant for passengers and bystanders.

The first X-plane was the X-1, which made history in 1947 by becoming the first airplane to fly faster than the speed of sound. Jaiwon Shin, associate administrator for NASA’s Aeronautics Research Mission Directorate said:

Dozens of X-planes of all shapes, sizes and purposes have since followed – all of them contributing to our stature as the world’s leader in aviation and space technology. Planes like the X-57, and the others to come, will help us maintain that role.