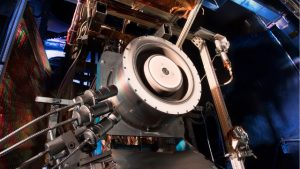 A 13-kilowatt Hall thruster being evaluated at NASA’s Glenn Research Center. Hall thrusters trap electrons in a magnetic field and use them to ionize the onboard propellant. It uses 10 times less propellant than equivalent chemical rockets.

There are no places to stop and refuel on the journey to Mars, so spacecraft that travel on deep space exploration missions can’t depend on fuel. Aerospace engineers, therefore, are developing electric propulsion systems that use alternative sources of energy, especially solar power. NASA has just selected Aerojet Rocketdyne to design and develop an electric propulsion system as part of a $67 million project. Steve Jurczyk, associate administrator of NASA’s Space Technology Mission Directorate said:

Through this contract, NASA will be developing advanced electric propulsion elements for initial spaceflight applications, which will pave the way for an advanced solar electric propulsion demonstration mission by the end of the decade. Development of this technology will advance our future in-space transportation capability for a variety of NASA deep space human and robotic exploration missions, as well as private commercial space missions.

The project will include the development and delivery of an integrated electric propulsion system consisting of a thruster, power processing unit, low-pressure xenon flow controller, and electrical harness. Aerojet Rocketdyne will also build an engineering development unit for testing and evaluating the new system. According to a NASA press release about the agreement, the technology “could potentially increase spaceflight transportation fuel efficiency by 10 times over current chemical propulsion technology and more than double thrust capability compared to current electric propulsion systems.”