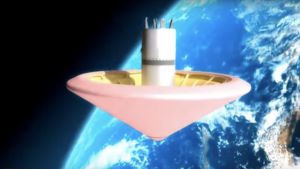 NASA scientists are preparing to launch inflatable deceleration technology into space on the Atlas V rocket. It will join the JPSS-2 satellite in an important mission: to determine if this technology could help humans successfully land on Mars.

When space shuttles re-enter the Earth’s atmosphere after a voyage, the drag from that atmosphere helps to slow it down, operating almost like a brake. However, this technique won’t work on Mars; the atmosphere there is about 100 times thinner than the one we’re used to on Earth. As such, spacecraft won’t be able to rely on it to slow down safely.

“Right now, heat shields are rigid, and the maximum size is constrained by the size of the launch vehicle.”

The Curiosity Rover is the largest object we’ve sent to Mars yet, weighing in at about 2,000 pounds. And if humans hope to make Mars habitable, they’ll need plenty of supplies, from food and water to complex life support systems — all of which will weigh significantly more.

The inflatable decelerator could pose a solution to this vexing problem. It’s made of braided synthetic fibers that are formed into tubes that are roughly 15 times stronger than steel. As the tubes are inflated, they form a blunt cone that is about 20 feet in diameter. This will maximize drag, allowing the device to slow down as needed for a safe landing. The decelerator is capable of withstanding temperatures of up to 2,900 degrees Fahrenheit — and now scientists will learn if it can withstand the brutal conditions of space and reentry.

For this run, the decelerator will not be given a payload. Instead, experts will study the wear and tear on the device to determine if it is capable of one day delivering vital equipment to Mars. It is expected to reenter Earth’s atmosphere somewhere over Hawaii, dropping from hypersonic to subsonic speeds. Experts believe it could go as fast as 5 miles per second.

While scientists are focused on using the decelerator for future Mars missions, this technology has other potential applications as well. It could be used to recover booster engines after launch, or even return materials manufactured in space, such as fiber optic cables.

Once the decelerator has returned to Earth, scientists hope to have a better understanding of exactly what sort of technology will be needed to make survival on Mars a reality.