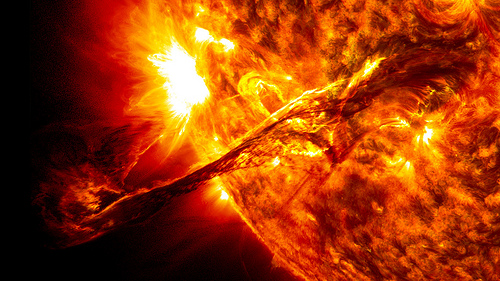 Lately, rumors about NASA have been flying around in the internet at warp speed. It all started when NASA engineer Paul March posted to an online forum with an update on the electromagnetic (EM) drive that he works on at the Johnson Space Center. After March publicly stated that his team had recently tested a prototype EM drive in a vacuum and determined that it produced a small amount of thrust, the news prompted exaggerated headlines about NASA’s new fuel-free engine that would fly faster than the speed of light. NASA has since downplayed the EM drive, telling space.com that the conceptual research ” is a small effort that has not yet shown any tangible results,” and further clarifying by saying, “NASA is not working on ‘warp drive’ technology.”

So what’s the big deal? For the last fifteen years, researchers around the world have been studying and testing EM drives, which could drastically change space travel by enabling spacecraft to fly at unimaginable speeds without the use of a propellant. Instead, the new technology works by directly converting electrical energy into thrust by bouncing electromagnetic microwaves around in a conical cavity. The concept of eliminating propellant defies logic because the EM drive violates the laws of physics, particularly the law of conversion which says that energy can’t be created or destroyed. Despite widespread skepticism, researchers at NASA and around the world continue to invest in the EM drive because if it works, it could take a spacecraft to the moon in just a few hours, or to Mars in just 70 days. Until then, amateur enthusiasts and NASA engineers will continue to debate the details of the conceptual EM drive in the lively online forum.