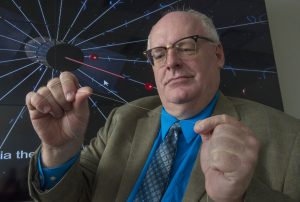 NASA has started testing a new propulsion system that would use solar wind to sail to the edge of our solar system in record time. The Heliopause Electrostatic Rapid Transit System (HERTS) wouldn’t use any propellant. Instead, a large, electric sail (E-sail) would create thrust by electrostatically repelling protons. Bruce Wiegmann, the principal investigator for the HERTS E-Sail, explains:

The sun releases protons and electrons into the solar wind at very high speeds—400 to 750 kilometers per second. The E-Sail would use these protons to propel the spacecraft.

The sail will be made of electrically-charged aluminum wires. When protons hit the positive wires, they will be repelled, and the momentum created during that exchange will create thrust. The wires would be about as thin as a paperclip and as long as nearly 219 football fields. A spacecraft could be steered by modulating a wire’s voltage on different portions of the E-Sail. 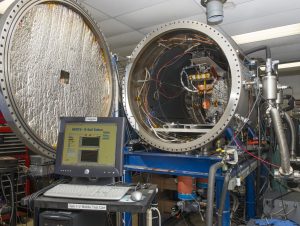 Tests within a controlled plasma chamber will examine the rate of proton and electron collisions with a positively charged wire. Results will help improve modeling data that will be applied to future development of E-Sail technology.

Engineers will spend the next two years testing HERTS at NASA’s Marshall Space Flight Center in Huntsville, Alabama. In a controlled plasma chamber that simulates space, they will observe and measure exactly what happens when protons and electrons collide with a positively charged wire. Their findings will be used to develop an electron gun that will expel excess electrons from the spacecraft to maintain the wire’s positive voltage bias. The technology is still in the very early stages of development, and will require at least a decade of research before it will be ready for a mission. If all goes according to plan, HERTS could dramatically speed up long-distance space travel. While NASA’s Voyager 1 took almost 35 years to reach interstellar space, an E-sail could get there in less than a third of the time.

In 2012, NASA’s Voyager 1 became the first spacecraft to ever cross the heliopause and reach interstellar space. Launched in 1977, Voyager 1 took almost 35 years to make its 121 AU journey. The goal of HERTS is to develop an E-Sail that could make the same journey in less than one-third that time. Wiegmann said:

Our investigation has shown that an interstellar probe mission propelled by an E-Sail could travel to the heliopause in just under 10 years,. This could revolutionize the scientific returns of these types of missions.