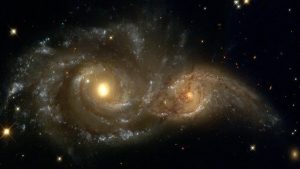 After several months of silence, NASA engineer Paul March has confirmed that NASA’s work on the controversial electromagnetic (EM) drive continues at the Eagleworks Laboratory at the Johnson Space Center. The hypothetical technology could radically change space travel by allowing spacecraft to fly to the edge of the Solar System in just a few months without the use of a propellant.

The EM drive defies the laws of physics, producing thrust out of thin air. Instead of using propellants, the drive uses a high-powered vacuum tube called a magnetron, where the interaction between a magnetic field and electrons generates microwaves. The magnetron directly converts electrical energy into thrust by bouncing the electromagnetic microwaves around in a conical cavity.

March’s recent comments on a NASA forum are in response to an unpublished paper that claims the mysterious thrust is generated by the Lorentz force (the combination of electric and magnetic force) between the EM Drive and the Earth’s magnetic field. While his past comments stirred up rumors about NASA’s impossible warp drive, March lamented “the restrictive NASA press release rules” that prevent him from sharing more details. Still, he was able to provide some insight, saying that his tests prove the thrust is unrelated to Lorentz force:

“I will tell you that we first built and installed a 2nd generation, closed face magnetic damper that reduced the stray magnetic fields in the vacuum chamber by at least an order of magnitude and any Lorentz force interactions it could produce.  I also changed up the torque pendulum’s grounding wire scheme and single point ground location to minimize ground loop current interactions with the remaining stray magnetic fields and unbalanced dc currents from the RF amplifier when its [sic] turned on.”

March’s post describes, in detail, several developments in his lab’s work on the EM drive, and he ends his post with a teaser, “And yet the anomalous thrust signals remain…”