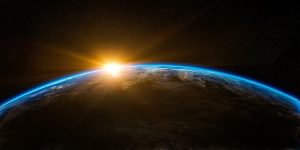 Image by Arek Socha from Pixabay

Scientists from NASA and AOSense, Inc. have designed and demonstrated a new type of quantum sensor capable of gathering extremely accurate measurements on gravity. This sensor is a dramatic improvement over past generations and could help make great advances in hydrology, geodesy, and climate-monitoring space missions.

The sensor was created as part of a collaboration with NASA’s Goddard Space Flight Center. It relies on a new measurement technique known as atom interferometry. It operates similarly to optical interferometry, which has been used for hundreds of years to measure the small displacements that occur between objects.

In optical interferometry, scientists used light that has been split between two paths in order to find measurements. With atom interferometry, scientists rely on special pulsing lasers capable of splitting and manipulating atom waves so that they travel along different paths. Gravity interacts with the two atom waves in a specific manner that alters their interference patterns after the waves recombine. From this data, scientists can then study the pattern and determine extremely accurate measurements.

Scientists from NASA and AOSense used this technology to develop their sensor, which can be used for mapping Earth’s gravitational field. As the gravitational field changes due to time and other factors, the sensor will record the measurements with astonishing accuracy.

“Our sensor is smaller than competing sensors with similar sensitivity goals. Previous atom interferometer-based instruments included components that would literally fill a room. Our sensor, in dramatic comparison, is compact and efficient. It could be used on a spacecraft to obtain an extraordinary data set for understanding Earth’s water cycle and its response to climate change. In fact, the sensor is a candidate for future NASA missions across a variety of scientific disciplines.”

Babak Saif, a Goddard optical physicist and collaborator in the effort

Researchers believe that this technology could be extremely useful for gathering extremely sensitive data. Currently, scientists rely on a two-satellite system that provides them with monthly gravity maps that demonstrate the distribution of mass over time. However, the new technology is far more accurate, and could effectively eliminate any need for the current satellite system.

Scientists are also exploring the possibility of using their new technology to measure the structure of planets, and even to better understand the inner workings of black holes.