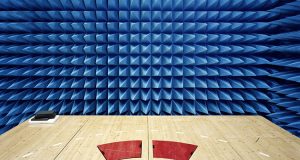 Every single type of electronic device emits a form of electromagnetic emission. With more and more devices coming into use every day, space on the spectrum is in short supply — and the emissions from so many machines can end up causing electromagnetic interference. People even experience this on some level in their daily lives in the form of the strange noise that comes from their cell phones right before they receive an incoming call.

However, it’s a much different story in space. Orion’s design includes GPS receivers, communication elements, and tele-command receivers, to name a few. This equipment, in particular, is especially sensitive to electromagnetic noise — which is why this phase of testing is particularly important to engineers.

Orion has already completed a comprehensive set of thermal vacuum tests and began electromagnetic interference testing at the end of February. For these tests, Orion is placed in a room designed specifically to keep any unwanted electromagnetic radiation away from the spacecraft. The rooms used for Orion have another interesting feature: they’re covered in a spiky foam designed to absorb electromagnetic emissions, allowing for more precise measurements to be taken.

“Because the vacuum chamber is so large, installing the absorption spikes was not an option so NASA had to think of another technique. The multiple reflections of the radio waves are not absorbed by spikes but reflected from the side walls, floor and ceiling multiple times to reach the equipment being tested from all possible directions and this is in our favor.”

Johannes Wolf, Head of the EMC and harness section

The extensive testing process is expected to last about two weeks. During that time, several hundred individual components of the spacecraft will be thoroughly tested to ensure they can withstand the rigors of space travel. The Orion spacecraft is scheduled to launch sometime in 2021.