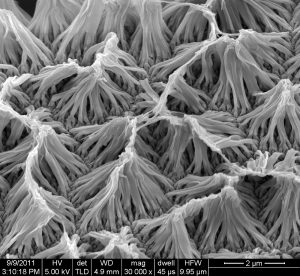 An image of a field of polypyrrole nanowires captured by a scanning electron microscope is shown. (Purdue University image/courtesy of Richard Borgens)

Purdue University researchers have developed a new implantable drug-delivery system using nanowires that can be wirelessly controlled. The new method allows medicine to be applied directly to the site of an injury, which make very small doses just as effective as larger amounts. It also eliminates tubes or wires that have been known to cause infection or other complications. Researcher Richard Borgens said, “The technology is in the early stages of testing, but it is our hope that this could one day be used to deliver drugs directly to spinal cord injuries, ulcerations, deep bone injuries or tumors, and avoid the terrible side effects of systemic treatment with steroids or chemotherapy.”

The researchers grew the nanowires vertically over a thin gold base. They are made of polypyrrole, a conductive polymer material that responds to electromagnetic fields. The material is inert and biocompatable, but the team is working to create a biodegradeable form that would dissolve after delivering the medicine. The nanowires, which are hundreds of times smaller than a human cell, were bunched together like fibers of a carpet, and loaded with a drug. Next, a small patch of the “carpet” was transported on water droplets to the site of injury, where it adhered via surface tension. Finally, an electromagnetic field stimulating device triggered the nanowires to release small amounts of the medicine. The process can be started and stopped on demand.

The details of exactly how the drug is released are still being investigated. “We think it is a combination of charge effects and the shape change of the polymer that allows it to store and release drugs,” Borgens said. “It is a reversible process. Once the electromagnetic field is removed, the polymer snaps back to the initial architecture and retains the remaining drug molecules.” The researchers tested their nanowire system on mice with compression injuries by delivering a corticosteroid directly to their spinal cords. They found that after one week of treatment the mice had reduced or even eliminated the biomarkers for the injuries. A paper detailing the results is published in the Journal of Controlled Release.