A new nanocomposite material, invented by a group of researchers at the Queen Mary University of London, acts as an invisible cloak from electromagnetic waves.

According to a recent study, published in the journal Scientific Reports, researchers created a device with a dielectric surface wave cloak engineered from nanocomposite materials demonstrating the ability to control surface wave propagation by using graded-index materials.

We demonstrated a practical possibility to use nanocomposites to control surface wave propagation through advanced additive manufacturing. Perhaps most importantly, the approach used can be applied to other physical phenomena that are described by wave equations, such as acoustics. For this reason, we believe that this work has a great industrial impact.

The graded-index nanocomposite is comprised of seven distinct layers of dielectric film of varying electrical properties. The precise layering alters the interaction with electromagnetic radiation allowing an object to appear as flat, or “invisible”, when viewed at varying wavelengths. The design uses a transformation optics-based designed, inspired by Maxwell’s Equations. 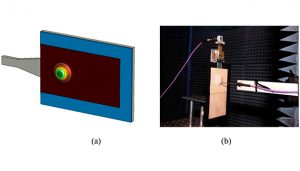 To demonstrate the ability to provide an invisible cloak, the researchers applied the nanocomposite material as a coating onto the lower ground plane of a curved surface so the outer ground plane could be machined into a desired profile (a technique that is inexpensive and highly reproducible on the manufacturing floor). The curved surface was then attached to a flat dielectric slab and setup with a pyramid horn antenna for mode excitation and a monopole probe to detect the surface wave along the device. The setup was additionally monitored by a full-wave electromagnetic solver to validate performance across the 8-12 GHz frequency band.

Although the nanocomposite material cannot provide humans with a personal cloaking device at this time, the development of such material is a significant advancement. The design of the nanocomposite cloaking material will prove useful for engineering applications such as nano-antennas and the aerospace industry.