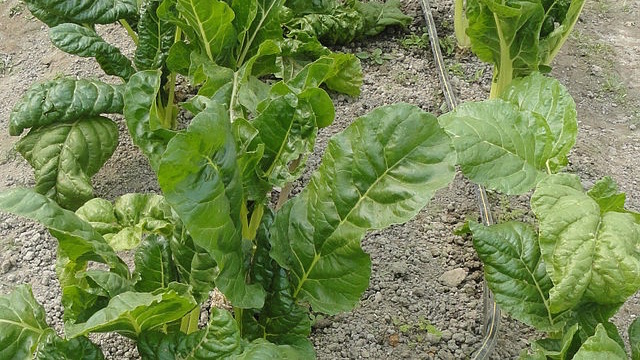 We all know that vegetables are good for us. Spinach in particular has been hailed as a ‘superfood,’ stuffed full of vitamins and nutrients. Even those who aren’t fans of the leafy green vegetable will love its newest role: helping scientists detect explosives.

Researchers at the Massachusetts Institute of Technology (MIT) have created a type of spinach capable of warning people about explosives. Scientists took traditional spinach and embedded the leaves with carbon nanotubes. The plants were then able to gather information about their surroundings via a host of sensors. All the data they collected was sent wirelessly to a handheld device, providing scientists with a in-depth analysis of the area.

But how does that translate into warning people about land mines? These weapons contain chemicals known as nitroaromatics. When the land mines are placed in the ground, these chemicals end up in the water — where they can be detected by the spinach. If the leaves pick up any traces of these chemicals, they send an alert back to the scientists.

Time is of the essence when it comes to determining if any dangerous explosives are nearby, and this advanced spinach can compile data at an impressive speed. It takes a mere 20 minutes for water to reach the leaves of the spinach plant, at which point it can send out a signal should any questionable chemicals come into contact.

This breakthrough technology is being called ‘plant nanobionics,’ and it very well may be the next big field of study. By combining the frankly remarkable traits of plants with advanced nanotechnology, scientists believe they can develop comprehensive systems for alerting people to oncoming danger — and that’s just the start.

As of now, the spinach plant nanobionics are limited by one major factor: distance. They can only detect explosives within a one meter radius. But scientists are convinced that they will soon be able to significantly expand the strength of their invention. We’ve always known that spinach is good for us; who knew it could literally save lives?