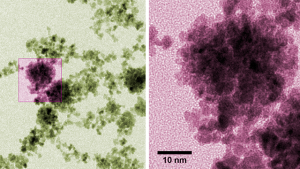 Researchers at the National Institute of Science and Technology (NIST) have made a discovery that will help develop more practical fuel cells in the future. Fuel cells are similar to batteries because they both generate electricity from an electrochemical reaction, but fuel cells use an external supply of chemical energy (usually hydrogen and oxygen), which means they can run indefinitely. The NIST team developed a new way to produce microscopic clusters of nanoscale particles that act as catalysts to help convert liquid methanol to electricity. In the future, methanol fuel cells could be an alternative power source for vehicles.

They created Platinim “nano-raspberries,” which are tiny clusters of matter. Their nickname comes from their unique raspberry shape, which is important because they have a high surface area, which helps with the design of a catalyst. For fuel cells, nanoparticles often are mixed with solvents to bind them to an electrode. The NIST study revealed clumping behavior in solvents, which is a key issue that will help guide the search for alternative catalyst materials. “Our innovation has little to do with the platinum and everything to do with how new materials are tested in the laboratory,” project leader Kavita Jeerage said, in a NIST release. “Our critical contribution is that after you make a new material you need to make choices. Our paper is about one choice: what solvent to use. We made the particles in water and tested whether you could put them in other solvents. We found out that this choice is a big deal.”

For fuel cells, catalyst particles should ideally remain separated and dispersed in the liquid, not clumped. The researchers tested several solvents and found that the clumping behavior depends on the solvent’s electrical properties. They observed that the nano-raspberries formed undesirable bunches in the least polar solvents, which makes those solvents poor candidates for a catalyzer. Water, which is highly polar, was a better solvent because it was used to make raspberries in just 40 minutes with minimal clumping. The method is described in a paper in the Journal of Nanoparticle Research.

While most fuel cell research focuses on the nanoparticle material, the NIST paper proved that scientists should also consider which solvent the material is paired with. This new knowledge will help make fuel cells a more practical alternative to oil.