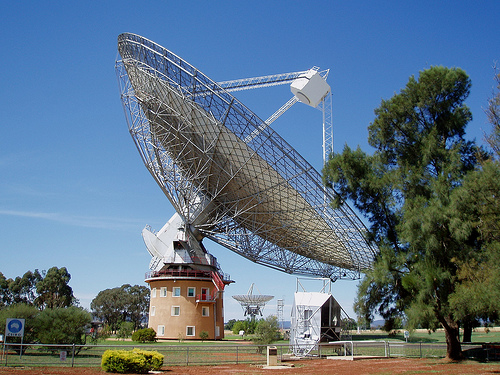 Astronomers at Australia’s Parkes radio telescope just solved a 17 year old mystery. It turns out the source of previously unidentified radio signals, called perytons, was right in the telescope’s employee kitchen. The signals were first detected in 1998, and they have appeared once or twice each year since then. Astronomers suspected that the signals were coming from somewhere within a few miles of the telescope, so they assumed the cause was lightning strikes or something else in the atmosphere, but they couldn’t quite pinpoint the source. Then in January they installed a Rohde & Schwarz Radio Frequency Interference (RFI) monitor, and detected strong signals at 2.4 GHz, the wavelength associated with microwave ovens.

First, they did the obvious thing, by testing the 27-year-old microwave ovens that Parkes observatory staff members use to heat their lunches, even though it still wouldn’t explain why the signals appeared so infrequently. They found no sign of perytons. Finally, after three months and more than 350 hours of RFI monitoring, they discovered that the signals were produced by RFI caused by opening the microwave door while it was still running. The signals were intermittent because interference only happened on the rare occasion when someone opened the microwave too soon while the telescope happened to be pointed in the direction of the microwave oven.

The telescope was established 50 years ago, in a rural area far away from electromagnetic noise. However, interference has been an increasing problem because the town has recently become more developed. Astronomers won’t have to worry about interference at a new facility, called the Australian Square Kilometre Array Pathfinder (ASKAP), that is being built in Western Australia. The new telescope will be located in a radio quiet zone, much like the one in Green Bank, West Virginia that is home to the Robert C. Byrd radio telescope. Australia’s protected zone was established in 2007 in an area with extremely low population density. Throughout the zone, large signs advise visitors to turn off their cell phones and special permits are required for wireless internet or radios. When the new telescope is completed in 2016, astronomers will just need to double check the staff’s kitchen for interfering appliances before they begin their work. Now that the peryton mystery has been solved, the researchers around the world will continue to search for the cause of inexplicable fast radio bursts that the Parkes team previously observed.