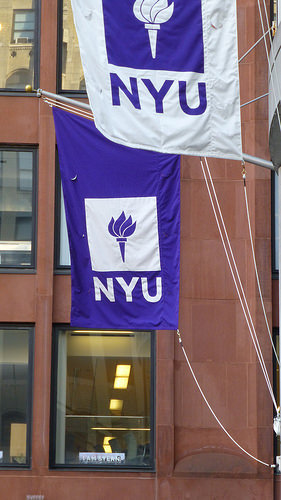 NYU’s Polytechnic School of Engineering today announced a $5 million gift to endow scholarships to assist STEM students who demonstrate financial need and academic talent.   The William R. and Marjorie Berkley Scholarship Fund is the largest gift for financial aid in the School of Engineering’s history, and will provide generations of students with financial aid in the form of grants, which do not have to be paid back.

Financial aid is NYU’s foremost fundraising goal.  In 2013, the University launched the Momentum Campaign to raise $1 billion specifically for financial aid, and is approximately halfway to its goal.  NYU has made significant strides in improving financial aid in recent years (see below).

The engineering school has a long history as an engine of social mobility, educating students from diverse economic strata and launching them on fulfilling careers in technology and innovation. Moreover, its graduates report some of the highest salaries in the country.

Mr. Berkley, chairman and CEO of W.R. Berkley Corporation and chair-designate of the NYU Board of Trustees, said, “Now, more than ever, investing in education is one of the most important financial commitments an individual can make.  And, as proficiency in science, technology, engineering and math become ever more critical in our rapidly changing global environment, Marjorie and I feel fortunate that we are in a position to help ensure that the best and brightest, from all walks of life, have an equal opportunity to fully realize their talents and make a meaningful impact on this as well as future generations.”

“This generous gift from William and Marjorie Berkley supports the commitment by NYU and the School of Engineering to maintaining excellence without sacrificing socioeconomic diversity,” said Katepalli R. Sreenivasan, dean and president of the School of Engineering. “This Scholarship Fund will help ensure that qualified students will be able to study here, no matter what their financial background. This kind of private philanthropy is what contributes to our vibrant environment for learning.”

William Berkley, a 1966 graduate of the NYU Leonard N. Stern School of Business, is chair-designate of the NYU Board of Trustees and will assume the chairmanship in October 2015.  Named a member of the Stern School Board of Overseers in 1987 and chair in 2000, he has been an NYU Trustee since 1995 and served as vice chair since 2004.  He has been a member of the NYU Langone Medical Center Board since 2007.  He founded W. R. Berkley Corporation, a Fortune 500 property casualty insurance company, in 1967 and has served continuously as Chairman and CEO.  Over the years, he has been actively involved in numerous not-for-profit and charitable organizations, and currently chairs Achievement First, a group of charter schools operating in the New York Metropolitan area, serving over 7,000 inner-city children in Connecticut, New York and Rhode Island.

Improvements in financial aid at NYU include: