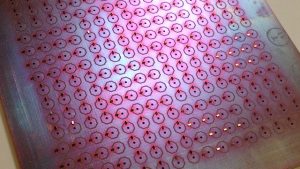 Researchers from Duke University and Institut Langevin, France have designed a new motion sensor that is sensitive enough to pick up on a person’s breathing. The sensors are based on a new type of metamaterials combined with radio waves; the patterns made by the radio waves can pick up a person’s location anywhere within a room. This technology could prove instrumental in a variety of smart home devices, energy saving, gaming, healthcare, and security.

“Energy companies don’t love infrared motion detectors because they have lots of problems. The amount of space they can cover is limited, a person has to be within their line of sight to be detected, and probably everyone has had the experience where the lights have gone off because they’ve sat still for too long. Radio waves can get around all of these limitations.”

David R. Smith, the James B. Duke Professor of Electrical and Computer Engineering at Duke

Scientists studied the patterns made by radio waves as they bounce around a room. The patterns created as the radio waves move and overlap change with even the most minute movements. With a properly sensitive antenna, scientists can use those waves to determine the moment someone enters or exits a room. Perhaps most interesting, by studying how patterns alter over time, scientists can detect cyclical movements like a person breathing.

Additionally, the system can also be modified to gather information to locate people or objects within a certain space. A pattern of radio waves was scattered by a triangular block set in 23 separate positions on the floor. The system was then taught the pattern; with the data at hand it was able to distinguish between the 23 separate scenarios created by scientists, as well as distinguish the separate positions of three identical blocks set up in any of 1,771 various configurations.

The system relies on researchers’ ability to dynamically control the shape of the waves, thanks to metamaterials. A flat-panel antenna constructed from metamaterials is capable of shaping waves into an assortment of configurations, allowing scientists to create all sorts of different wave fronts quickly and easily. This could also significantly reduce the cost of motion sensor technology, as a single metamaterial antenna can do far more than a roomful of traditional antennas.

Scientists are working on enhancing and streamlining this technology. They believe further improvements could allow the technology to note subtle aberrations in breathing and movement that could be of profound use to the healthcare industry.