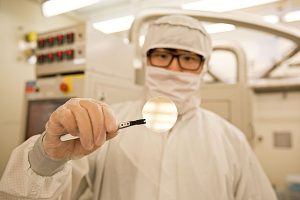 Researchers from MIT, Columbia University, IMB, IQE, and the Singapore-MIT Alliance for Research and Technology have developed a new model for power conversion. Scientists think this could be a huge step forward for effectively charging electric cars, power grids, and a variety of other everyday devices.

The very nature of power conversion makes it inefficient. No matter what, a converter simply cannot output as much power as it takes in. But while some power loss may be inevitable, it can be managed and minimized with a little extra effort. Scientists have been experimenting with power converters made from gallium nitride, which have higher efficiencies as well as smaller sizes than conventional silicon-based converters. Unfortunately, gallium nitride devices aren’t capable of holding voltages over 600 volts. This obviously presents a major problem when it comes to charging devices.

The team of scientists behind the new design were determined to change this. Their new model allows gallium nitride power devices to deal with voltages up to 1,200 volts. That’s a significant improvement — and it’s only the prototype. Additional research indicates that scientists should be able to boost the capacity significantly. The team is aiming to create a device with a 3,500-5,000-volt range. This concept is only possible because of a significant fundamental design difference that sets this model apart from previous iterations.

“All the devices that are commercially available are what are called lateral devices. So the entire device is fabricated on the top surface of the gallium nitride wafer, which is good for low-power applications like the laptop charger. But for medium- and high-power applications, vertical devices are much better. These are devices where the current, instead of flowing through the surface of the semiconductor, flows through the wafer, across the semiconductor. Vertical devices are much better in terms of how much voltage they can manage and how much current they control.”

Tomás Palacios, MIT professor of electrical engineering and computer science, a member of the Microsystems Technology Laboratories, and senior author on the new paper

The new model allows currents to flow into one surface of the vertical device and out another. This creates more space for scientists to attach input and output wires, resulting in higher current loads. Additionally, this model has done away with relying on an internal barrier to route currents. Instead, scientists opted for a narrower device, allowing the gate electrode to switch the transistor on and off as needed.

Although further testing and experimenting is required, scientists are confident that the new design will work well on the commercial level. With these advances, the fundamental design of transistors has changed in ways no one ever saw coming.