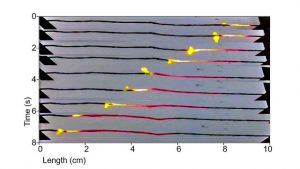 In this time-lapse series of photos, progressing from top to bottom, a coating of sucrose (ordinary sugar) over a wire made of carbon nanotubes is lit at the left end, and burns from one end to the other. As it heats the wire, it drives a wave of electrons along with it, thus converting the heat into electricity.

Six years ago, MIT professor Michael Strano discovered that carbon nanotubes produce powerful waves that could used to make an entirely new class of energy systems called thermopower wave (TPW) devices. He said that this previously unknown phenomenon could theoretically be used to create a better alternative to batteries, but unfortunately real-life laboratory experiments only produced small amounts of electrical current. Now, Strano and his team have drastically increased the efficiency, putting the technology “within striking distance of other portable energy technologies.” In fact, the energy efficiency is now 10,000 times greater than when the TPW was first reported in 2010. The MIT team described their latest work in a research paper that published in the journal Energy & Environmental Science.

There is a pressing need to find alternatives to conventional batteries such as Li-ion, which contain toxic metals, present recycling difficulties due to harmful inorganic components, and rely on elements in finite global supply. Thermopower wave (TPW) devices, which convert chemical to electrical energy by means of self-propagating reaction waves guided along nanostructured thermal conduits, have the potential to address this demand.

The TPW devices harness heat without using any metals or toxic materials. To make the system, the researchers coated a wire made from carbon nanotubes with a flammable material. When it is heated, a thermal wave travels along the wire, carrying electrons along for the ride. In recent experiments, the MIT researchers coated the wire with simple table sugar. While ubiquitous lithium is extremely flammable when exposed to air, sugar is much safer, and is also a renewable resource. With sugar, the device is strong enough to power simple electronic devices such as an LED light, and other combustion materials that could generate even higher efficiencies. Furthermore, the new system can sit in storage indefinitely without losing power, unlike batteries that have a limited shelf life. It is also unique because the technology can scale down to smaller sizes than conventional energy storage. Despite these obvious advantages, the researchers caution that the TPW is still several years away from commercialization.