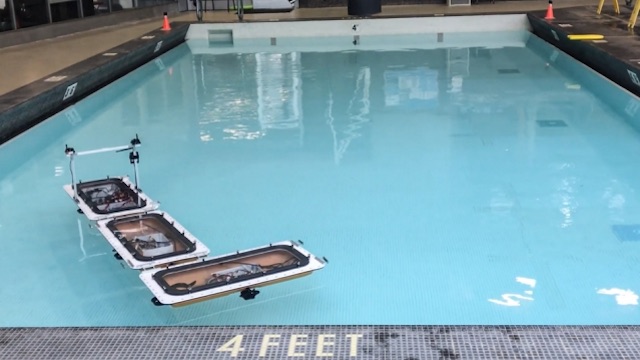 Scientists from the Massachusetts Institute of Technology (MIT) have taken their fleet of autonomous robotic boats one step further, providing them with the ability to shapeshift and form an assortment of useful tools and structures. The boats are known affectionately as part of the ‘Roboat’ project, which is a joint venture between MIT and the Amsterdam Institute for Advanced Metropolitan Solutions (AMS Institute). The teams have been hard at work on these vehicles since 2016 — and this newest advance promises to be an exciting one.

The boats consist of rectangular hulls that have been outfitted with an assortment of sensors, cameras, thrusters, GPS modules, and microcontrollers. Scientists hope the autonomous boats will one day be able to travel along Amsterdam’s 165 canals, providing locals with an assortment of services, including transportation, deliveries, cleaning up trash, and even transforming into platforms like bridges and stages. Researchers behind the project believe these advanced aquatic vehicles will help to reduce congestion on city streets as more people utilize the water as a means of transportation.

Currently, the boats are capable of moving along a preprogrammed path and can turn around easily as needed. Their design is low-cost, thanks to relying on 3-D printing technology, and their small size and sleek design makes moving through the twisty canals a simple feat. And in June of this year, scientists were able to successfully develop an autonomous latching mechanism. This allows the boats to clasp onto one another as needed for an assortment of different and versatile uses.

Researchers have now given the boats another impressive feature: they’ve created an algorithm that gives the boats the ability to reshape autonomously. Using the algorithm, the boats can latch and unlatch as needed in a set configuration, travel a predetermined path while avoiding obstructions, and finally reattach at their chosen location.

Scientists demonstrated their new technology in a pool at MIT. The linked roboat units were able to form a straight line, an ‘L’ shape, and a square in just a few minutes. Researchers believe with further study and experimentation, they should be able to form even more complex shapes that could prove useful to those traveling the canals of Amsterdam.