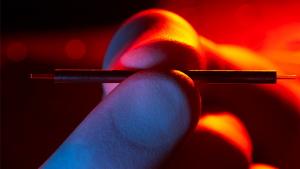 A team of researchers has built the first prototype of a miniature particle accelerator that replaces radio frequencies with the much shorter terahertz radiation. This new technology could be used to build X-Ray lasers, as well as potentially being applied to medicine, materials science, and particle physics.

Particle accelerators like the famous Large Hadron Collider use radio waves to transfer energy and then accelerate particles. The relatively low frequency of the radio waves limits the amount of energy that can be sent, so particle accelerators are usually very long (we’re talking about distances measured in miles). The new technology, however, uses terahertz radiation, which lies between infrared radiation and microwaves on the electromagnetic spectrum. Terahertz waves have been mysterious, but recent advances have enabled scientists to start to take advantage of their special properties. They are a thousand times shorter than the ones used in traditional particle accelerators, which operate at around 500 MHz. “The advantage is that everything else can be a thousand times smaller too,” explained researcher Franz Kärtner. In the future, particle accelerators that use terahertz could be just about a meter long, while still performing just as well as today’s bulky machines.

The researchers—from MIT in the US and DESY (Deutsches Elektronen-Synchrotron) in Germany—built their prototype using a special microstructured accelerator module that was designed to be used with terahertz radiation. First, they fired fast electrons into the miniature accelerator module using an electron gun. Then the electrons were then accelerated even more by the terahertz radiation fed into the module. A paper describing the work published in the journal Nature Communications.