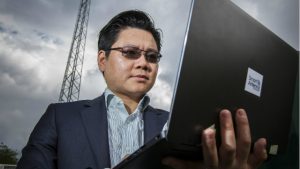 A British tech start-up has invented a MIMO (Multi-Input-Multi-Output) antenna system that fits inside a laptop’s hinge cavity. It replaces as many as 5 separate antennas found in a standard laptop. This patented antenna was developed by Smart Antenna Technology (SAT), a spin-off company that was started by scientists at the University of Birmingham. Dr. Sampson Hu, the founder of SAT says:

If the laptop has a metal casing then it is impossible to embed an antenna on the top of laptop screen or motherboard and the antenna must sit in the hinge cavity. However, the hinge cavity is a very limited space in which laptop manufactures can only fit two conventional antennas, one for Wi-Fi and one for 3G/4G LTE. If conventional antennas are brought so close together interference degrades efficiency and increases battery usage.

The inventors say the new MIMO system combines Wi-Fi, GPS and Bluetooth and 3G/4G LTE and WiGig 60GHz wireless standards in one unit, without interference. SAT is now in discussions with Sony to manufacture the antenna system.