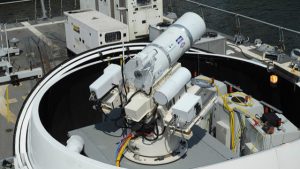 Several senators spoke at the Subcommittee hearing to reiterate the importance of funding research for DE and laser technology. Sen. Angus King, an Independent from Maine, said:

I’m really disappointed that that seems to be going off the budget table, when to me it’s penny wise and pound foolish. Directed energy would be a lot cheaper if it works than sending a rocket up every time.

To prove the technology’s progress and potential, industry and military laboratories displayed mockups and illustrations of DE systems in the Pentagon’s courtyard. In one demonstration, representatives from the Air Force Research Laboratory showed off a heavy truck equipped with a megawatt generator turbine for sending DE beams to defuse explosives or to set them off from a distance. This system, called Leidos, has a projected cost of $6 or $7 million, although program manager Tommy Cavazos said he’d like to see the cost come down to $1 million.

During the same week, two Democratic and Republican senators introduced a bill to speed up the acquisitions process for the development and fielding of directed energy weapons systems.  In the proposed Directed Energy Weapon Systems Acquisition Act of 2016, Sen. Jim Inhofe, an Oklahoman Republican, and Sen. Martin Heinrich, a New Mexico Democrat, are seeking at least $300 million for DE weapons technology. Heinrich said:

I truly believe that directed energy will provide our armed forces with a qualitative advantage over our adversaries and play a critical role in the future of weapons systems for our military. This legislation will drive change forward even faster.