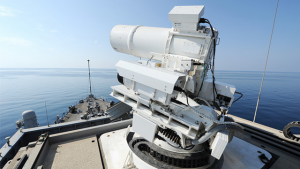 Large scale demonstrations of lasers, microwaves, and other directed energy (DE) weapons that emit focused energy will start in the United States in the next five years, according to military officials who spoke at a DE summit earlier this week. Officials described some of the projects that are already in progress with the U.S. Navy, Marine Corps, Air Force and Army.

The Navy, for example, recently demonstrated a laser that can destroy small boats and unmanned aerial vehicles, and can also be used as a telescope. The Air Force has also built a high-power weapon that uses microwaves to rapidly raise body temperatures. The weapon would not kill people, but it could be deployed on drones to help disperse crowds. More DE projects are in development and will be tested at sea soon. Next year, the Navy plans to test a new railgun that can hit targets 100 miles away. By 2018, the Navy plans to test a 100-150 kilowatt laser prototype.

At the summit hosted by the Center for Strategic and Budgetary Assessments and technology and engineering consulting firm Booz Allen Hamilton, military officials said that DE weapons are “an entirely new era in defense” that could result in better defense at lower financial costs. However, they also said that many other countries are also working on DE weapons. Navy Secretary Ray Mabus said that just two weeks ago, a naval ship and helicopter were targeted by an Iranian laser and last week 11 commercial airlines were targeted by lasers. He said the U.S. must move quickly to develop a comprehensive DE program and speed up acquisition processes in order to stay ahead of adversaries. Defense Undersecretary Frank Kendall, the top U.S. arms buyer, said Pentagon funding for directed energy programs would stay at about $300 million a year for now.