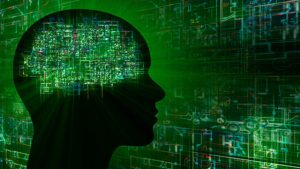 The U.S. military is developing an implantable device that will translate your brain’s signals into the language of ones and zeros that computers speak. DARPA, the Pentagon’s research and development arm, will manage the new program, called Neural Engineering System Design (NESD). Brain interface systems are already under development by DARPA and other research groups, but the new system will be faster and therefore more practical.

“Today’s best brain-computer interface systems are like two supercomputers trying to talk to each other using an old 300-baud modem,” said Phillip Alvelda, the NESD program manager. “Imagine what will become possible when we upgrade our tools to really open the channel between the human brain and modern electronics.”

The project specifically aims to create a small implantable device that will convert the electrochemical language that neurons use to communicate into binary code that can be used for information technology applications. For example, it could be used to give soldiers superhero-style abilities to see and hear by feeding high resolution visual and auditory information to the brain.