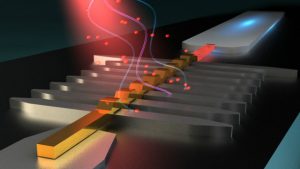 Researchers from Aalto University in Finland have set a new world record for microwave detection. They developed a device that has 14 times higher energy resolution of thermal photodetection. Their work could lead to improvements in communication systems and measurement techniques—the new ultrasensitive detector should be able to accurately measure single microwave photons. It could also be used to make ultrasensitive cameras and accessories for quantum computing.

Existing superconducting technology can produce single microwave photons. However, detection of such traveling photons efficiently is a major outstanding challenge. Our results provide a leap towards solving this problem using thermal detection.

The new ultrasensitive microwave detector is smaller than a single human blood cell. The design is made of tiny pieces of superconducting aluminum and a golden nanowire, which enables efficient absorption of incoming photons and very sensitive readout. It uses a mechanism called positive feedback, where an external energy source amplifies the temperature change arising from the absorbed photons.

Mikko Möttönen, leader of Aalto’s Quantum Computing and Devices group, has been awarded with the European Research Council’s Proof of Concept Grant to develop the microwave detector towards commercial applications. He says, “For us size matters. The smaller the better. With smaller detectors, we get more signal and cheaper price in mass production.”