Submerging a giant computer system under water might be a little crazy, but Microsoft thinks it’s worth a shot. The company is building data centers under the ocean in an effort to find creative solutions to a growing demand for the servers that support cloud computing. A 38,000-pound container filled with powerful servers has already spent three months under the ocean and the project team is now working on a larger, more powerful system for the next round of testing. 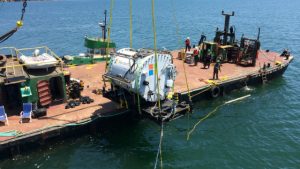 If the experiment works, moving data centers to the ocean could offer several benefits. Microsoft says underwater data centers could reduce latency because servers would be located closer to many coastal end users. The project website says, “50 percent of us live near the coast. Why doesn’t our data?” The big advantage is the water itself, which could provide natural cooling—an essential and typically expensive feature of today’s data centers, which generate heat while they process data. Microsoft is also considering using the ocean’s tides or wind power to provide renewable energy to run servers in the future. These unconventional data centers can be deployed quickly; they are built in pods and then dropped into the ocean, so they don’t require the permits and additional delays that plague land-based data centers.

The project is in the early phases of testing and is far from being ready for commercialization. The system itself is not yet perfected, and Microsoft would need to ensure that the underwater system will not harm the environment. Still, the company says “the knowledge gained from the three months this vessel was underwater could help make future data centers more sustainable, while at the same time speeding data transmission and cloud deployment.”