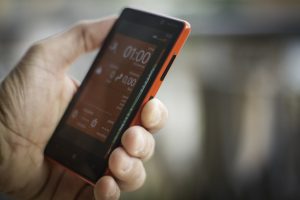 Microsoft researchers in Bejing have published a paper that describes a new system that would automatically charge smartphones using indoor light.

The system, called AutoCharge, includes a camera that detects the presence of a smartphone. It takes continuous pictures of a surface, such as a desk, and then it alerts the charging system if a smartphone is present and in need of a battery charge. Then a rotating motor adjusts the direction of a light beam so that it shines directly on the phone in order to recharge the battery. The light will automatically shut off if an object or a person blocks the beam.

In their paper, the researchers describe how they take the idea of solar energy and apply it to an indoor setting. Solar power can usually only be used outdoors because scattered indoor light is too weak to power an electronic device such as a smartphone. Solar energy is also weather dependent and does not work at night. In order to tackle these challenges, the Microsoft AutoCharge system generates a straight light beam with minimal scattering. The researchers suggest they might use invisible, cool lights such as an infrared light beam. In order to work with the system, compatible smartphones would utilize a photovoltaic (PV) cell. When PV cells are exposed to light, semiconductors absorb the energy of the photons and release free electrons, which move according to the electric field and generate electricity.

The AutoCharge prototype uses a PV panel with high efficiency for converting light into electricity, a high power light to generate a strong enough light beam, and an optical lens to shape the beam in order to avoid potential energy waste caused by scattering.

At this stage, the research is more theoretical than practical, and the researchers admit their prototype is not close to being ready for making a commercial product. They will continue to work on better algorithms for image detection so that smartphones can be easily identified by the system. The exact light source has not yet been fine tuned. Finally, the Microsoft researchers also recognize that the charging system requires that smartphones integrate PV panels.