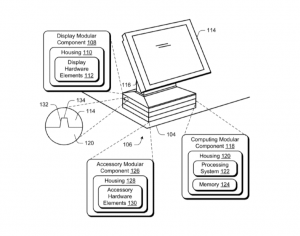 The United State Patent and Trademark Office recently published an application by Microsoft for a modular personal computer (PC). The application describes an all-in-one PC with stackable components that consumers can add to main computer display. The basic system would take up minimal space, but it can also be easiliy customized by adding extra memory or processing power for better performance.

While custom PCs aren’t exactly new, the system that is described appears to be slicker than other all-in-one PCs on the market, so more consumers could upgrade and repair their computers without needing expertise or spending too much money. Microsoft, like many companies, is adjusting to a challenging PC marketplace. The patent application also mentions using similar modular technology beyond PCs, such as for personal gaming devices and smart watches.