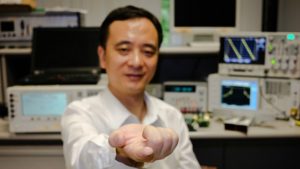 Electrical engineers at Nanyang Technological University (NTU) in Singapore have created a microchip for radar cameras that is more energy efficient, less expensive, and much smaller than today’s technology. The chip is still being developed, but the researchers say when it is finalized in the next few years it could be used in cameras for unmanned aerial vehicles (UAVs), small satellites, and driverless cars.

We have significantly shrunk the conventional radar camera into a system that is extremely compact and affordable, yet provides better accuracy. This will enable high resolution imaging radar technology to be used in objects and applications never before possible, like small drones, driverless cars and small satellite systems.

The microchip will help make a much smaller version of a Synthetic Aperture Radar (SAR), which is a radar camera that is commonly used to observe the earth from large satellites. SAR cameras use microwaves instead of light, so they can “see” through clouds, foliage, and darkness. They provide aerial views for observing weather, traffic, and natural disasters. Despite their benefits, SAR systems have limited uses because they are very large and expensive.

Now, NTU’s chip could help shrink these radar cameras down from weighing hundreds of pounds to becoming a small device that fits in the palm of your hand and weighs less than one pound. In addition to being 100 times smaller, lead researcher Zheng Yuanjin says the new technology is 20 times cheaper, consumes 75% less power, and can capture smaller objects so images would be twice as detailed as conventional SAR cameras.

The NTU team revealed their chip at the International Solid-State Circuits Conference in San Francisco in February. Since then, they say that several international corporations, such as Space X and Panasonic, have since expressed interest in the technology. Yuanjin said the radar camera is small enough that it could be used to give small satellites “the same advanced imaging capabilities previously only seen in the large satellites.” It could also be mounted to UAVs (drones) for security or traffic monitoring. “Driverless cars will also be able to better scan the environment around them to avoid collisions and navigate more accurately in all weather conditions compared to current laser and optical technologies,” he added.