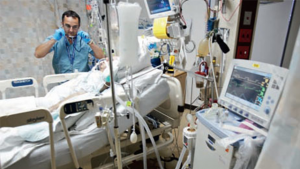 A faulty battery in two ventilators by Dräger Medical has prompted the U.S. Food and Drug Administration to issue a Class I recall. This is the most serious type of recall, suggesting a reasonable probability that these defective ventilators could cause serious adverse health consequences or death. The device does not accurately indicate when its battery is depleted, so the ventilator could run out of power and shut down unexpectedly, even though the indicator light shows the battery is charged. If this occurs, a patient may not receive necessary oxygen, which could cause injury or even death.

These ventilators can be used away from power sources during patient transport, so the battery is especially critical. When the “battery low” and “battery depleted” alarms sound, the devices do not indicate how much time is left before the ventilator will run out of power. Dräger says that if the power is lost, the battery back-up should last 30 minutes until the ventilator is connected to a main power supply. The battery, part of the PS500 power supply unit, is used in two ventilators that provide constant breathing support for patients. The Evita V500 Ventilator is used for adults and children, including premature babies. The Babylog VN500 supports premature babies. All lots are included in the recall of 2,081 devices that were distributed from June 1, 2011 to June 30, 2015.

Dräger Medical plans to replace all faulty batteries. In the meantime, the company has advised its customers not to rely on the battery status indicator. If the power fail alarm goes off, users should provide manual ventilation and immediate connect the ventilator to the main power supply. The recalled ventilators should not be used to transport patients. If using the device for transport is unavoidable, medical staff should take extra precautions, including determining the battery capacity by first charging the device and letting it run without a patient.