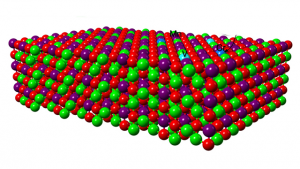 Scientists from Northwestern University believe they have found a way to stabilize high-capacity lithium-ion batteries. The proposed battery has a record-high charge capacity and is based on a lithium-manganese-oxide cathode. By predicting the best material to stabilize these batteries, scientists could potentially develop devices lasting more than twice as long between charges.

“This battery electrode has realized one of the highest-ever reported capacities for all transition-metal-oxide-based electrodes. It’s more than double the capacity of materials currently in your cell phone or laptop. This sort of high capacity would represent a large advancement to the goal of lithium-ion batteries for electric vehicles.”

Christopher Wolverton, the Jerome B. Cohen Professor of Materials Science and Engineering in Northwestern’s McCormick School of Engineering, who led the study

Lithium-ion batteries operate by moving lithium ions between the anode and the cathode. Cathodes are made from a compound of lithium ions, a transition metal, and oxygen. The transition metal is normally cobalt, and is particularly effective for storing and releasing electrical energy. The cathode’s capacity is limited by the number of electrons in the transition metal that are capable of participating in the process.

The large capacity lithium-manganese-oxide compound was first discovered by a French research team back in 2016. Unfortunately, their work was impeded by significant battery degradation. It was so bad, in fact, that researchers decided the process was not commercially viable. But the team from Northwestern University kept looking for a way to use the compound, determined to find a way to produce high-capacity batteries.

Their work led them to develop an intricate atom-by-atom picture of the cathode. By poring over the picture, the team was able to finally uncover why the material has such a high capacity. The material forces the oxygen to get involved in the reaction process as well as the transition metal. The addition of oxygen to the process helps the battery to store and release a higher capacity of electrical energy. The battery is also able to use more lithium thanks to this process.

The next problem to tackle was battery degradation. Scientists used high-throughput computations, which scanned through the entire periodic table. The computations would locate new ways to allow the compound with additional elements capable of enhancing the performance of the battery. Two elements were revealed to be viable options: chromium and vanadium. Scientists believe that combining either element with the lithium-manganese-oxide will result in stable compounds. The compounds should be capable of maintaining the cathode’s remarkably high capacity.

The next step in the process will be testing these theoretical compounds under laboratory conditions. Should this process prove successful, scientists could be well on their way to producing a commercial version of these high-capacity batteries.While this material theory remains to be proven, it has provided scientists with plenty of insight into cathodes and battery capacity that have previously never been uncovered.