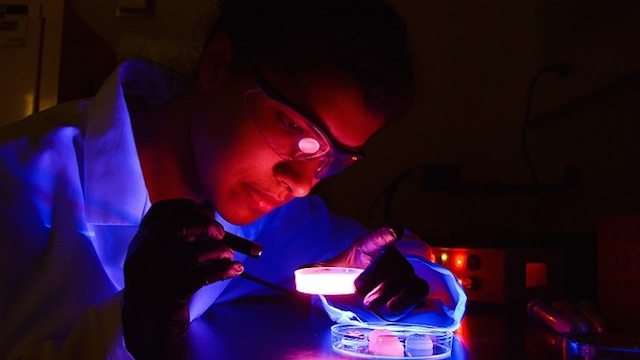 Researchers from the University of Leeds have discovered a new type of glass that could be an enormous benefit for broadband planar waveguide amplifiers. The material is made by doping a special type of glass, which is created with zinc, tellurium, sodium, and the rare earth element erbium. This unconventional combination of materials could help significantly in the efforts to miniaturize devices that rely on planar waveguides.

Most modern communication systems rely on optical fibers when it comes to sending signals between devices. Unfortunately, signal transmission demands especially long optical fibers; this has made efforts to miniaturize the devices significantly more difficult. Using planar waveguides could change all that around.

During the search for new technologies, erbium-doped waveguide amplifiers have been of particular interest to researchers. This is because the electronic transition for erbium occurs at the same wavelength that is standard in most telecommunications technologies – 1.5 microns.

A planar waveguide steers light along a single geometric plane. During this process, researchers used a technique called ultrafast laser plasma doping. This technique utilizes these ultrafast lasers in order to incorporate erbium ions as thin films in a silica substrate. A high-intensity laser was aimed at the surface of the erbium-doped glass. Then, the laser was used to blast a tiny crater in the glass. This resulted in a thin film from the plume of ejected material.

From this research, it was concluded that the ablation threshold of the glass did not depend on a low doping concentration of erbium ions required for engineering a device. While the study was exclusively focused on using erbium ions as a dopant, researchers were quick to point out that the results could also be applicable to other dielectric materials processed with ultrafast lasers.

The team further investigated the craters that were produced in the glass. By deciphering the morphology of the craters that the fabrication process created, researchers will be better able to control a variety of properties of the material. This would be particularly beneficial for adjusting the material to work well with amplifiers. The team hopes to be able to manipulate the material’s porosity, its ability to scatter or absorb light, and its surface area.

“These properties are important for engineering other dielectric materials for surface area-demanding applications in photocatalysis, sensing, fuel and solar cells, and light extraction in LEDs.”

With these findings still fresh, the research team is hard at work improving the precise engineering of thin films and waveguides. It is anticipated that amplifiers, sensors, and a whole host of other devices will benefit significantly from these advances.