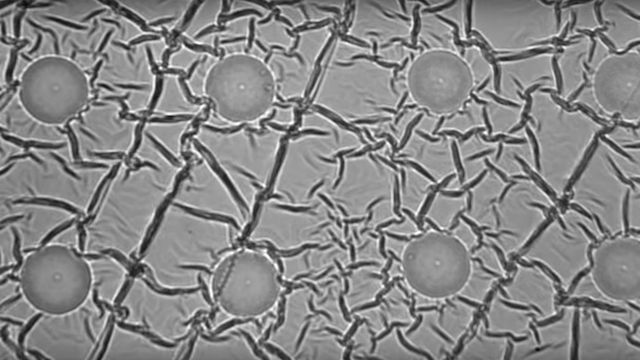 Scientists from the Massachusetts Institute of Technology (MIT) have built tiny robots the size of a single cell. Known as synthetic cells, or syncells for short, these devices have the potential to be used in multiple applications, including the medical and industrial fields.

Researchers created a new method in order to build these microscopic devices. In order to mass-produce these robots, scientists devised a new way to control the natural fracturing process of atomically-thin, brittle materials. The new method redirects the fracture lines in a way that makes them produce tiny pockets of a size and shape scientists can predict. Inside these pockets, electronic circuits and materials are embedded. These can be used to record, collect, and output data.

Brittleness has long proven a problem for scientists attempting to utilize graphene. But the MIT scientists opted to use this to their advantage, making sure the new system controls the fracturing process. The top layer of graphene goes over the polymer dots. The dots form round pillar shapes. In spots where the graphene drapes over the edges of the pillar, lines of high strain form in the material. This concentrates the fractures in very specific locations, allowing scientists to use them as needed.

Scientists believe this technology could have numerous applications. The syncells could be injected directly into a patient’s bloodstream, where they could seek out disease and come back with real-time facts and data. They could also be sent into oil and gas pipelines, where they could monitor for irregularities and provide scientists with information on environmental conditions.

Researchers are working to perfect their system and expand the capabilities of the syncells. Scientists are confident that the new technology will work well for commercialization.