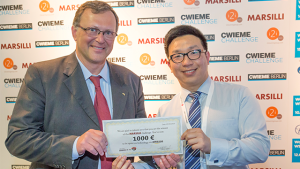 At last week’s CWIEME Berlin exhibition, key players in the electrical and electromagnetic industries gathered to watch four student teams battle it out for a €1,000 technology prize in the first ever CWIEME Challenge. This new initiative, sponsored by longstanding CWIEME exhibitor Marsilli (who also provided the prize), aimed to discover the most innovative electrical design and engineering projects from students around the world and introduce them to the industry’s leading manufacturers.

More than 20 high-quality entries were received, of which four were selected to present at a live final on Wednesday 6th May, moderated by author, broadcaster and futurologist James Bellini. The students were judged on communication and presentation, relevance to industry needs, technical innovation and potential for industrialization, with solo entrant Sheng Yuan from the University of Liverpool in the UK scoring the highest.

Yuan, originally from Shanghai, presented his PhD project on the potential to harvest magnetic field energy to power condition monitoring devices, such as partial discharge sensors and infrared detectors at electrical substations, as well as real-time weather stations beneath overhead power lines. The idea was suggested by UK wireless energy monitoring and control tools manufacturer Invisible Systems, as it was important to Yuan to spend time developing technology that would bring considerable and immediate benefits to the industry and society.

His proposal includes a novel bowtie-shaped core, which he discovered to have a much higher magnetic moment and as much as five times greater power output than a conventional solenoid, and a switch in the matching circuit, which could increase transmission efficiency by 30%. These innovations could significantly improve the reliability of condition monitoring devices, and reduce their maintenance and running costs. Yuan plans to complete his PhD project within the next one to two years and has already filed a patent.

Other projects in the final included the implementation of a DC/DC converter powered by a DC voltage inverter circuit, an integrated motor drive system, as well as the Karlsruhe Institute of Technology’s winning electric racecar from the 2014 Formula Student grand prix.

One of the judges, Giorgio Cacopardo, sales director at sponsor Marsilli said: “Sheng’s project stood out because we could see its industrialization in the near future and there was some ingenious thinking behind it – but all the competitors worked with impressive enthusiasm and patience.”

Marsilli, one of the world’s leading companies in the design and assembly of equipment for the manufacture of coil and electric motor components, leapt at the chance to sponsor the inaugural CWIEME Challenge.

“Many smaller companies like us have cut their R&D budgets, but we remain thoroughly committed to innovation. We’re not an off-the-shelf equipment supplier; rather we aim to co-innovate with our customers according to their individual needs, even the ones they haven’t thought of — constantly perfecting our machines with each order, whether in regards to size, precision, noise level, flexibility or user-friendliness. That’s why the CWIEME Challenge’s focus on promoting innovation struck such a chord with us,” said Dieter Kiefer, area manager for Germany at Marsilli.

“What’s more, there are lots of well-educated and ambitious young people out there who fit our philosophy of working independently and with passion. But coil winding is a niche area, which many students may not have heard of. CWIEME Berlin is an excellent occasion for the engineers of tomorrow to learn about what we do but also for us to support them. Only with a good mix of ages, genders and cultures can we continue to generate fresh and game-changing ideas,” he said.