Technology drives exploration and our journey to mars. 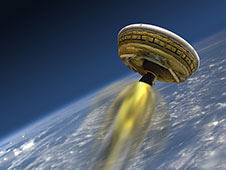 NASA has big plans for Mars, including a new robotic science rover in 2020 and putting humans on the red planet as early as the 2030s. But when Curiosity was delivered in 2012, NASA used the same landing systems that were first designed for the Viking mission back in 1976. If NASA is going to follow through with such ambitious plans for Mars exploration, there will have to be some major technology upgrades in the next few years. Future Mars exploration will require landing heavier spacecraft on the planet, so NASA is developing parachutes and inflatable drag devices that can be deployed faster than the speed of sound. The new technology, called Low-Density Supersonic Decelerators (LDSD), uses atmospheric drag to slow a spacecraft’s entry into a new atmosphere so that rocket engines and fuel can be reserved for final landing maneuvers.

The latest iterations of LDSD will be tested in Hawai‘i at some point in the next two weeks, depending on weather conditions. NASA’s Jet Propulsion Laboratory will conduct full-scale tests at supersonic speeds high in Earth’s stratosphere to prove the value of LDSD for future missions to Mars. The devices were tested on the ground earlier this week on a four mile rocket sled track. As soon as the weather is optimal, LDSD will liftoff in a balloon from the Navy’s Pacific Missile Range Facility in Kaua‘i. On-board high resolution, high speed, color cameras will allow the team to observe the deployment from the ground, and the devices will then splash down and be retrieved from the ocean.

Currently, NASA only has the ability to land on a small percentage of Mars, but the LDSD technology could open up at least half of the planet’s surface to increased payloads. The program costs 230 million dollars and includes two types of devices that work together to slow down a spacecraft as it approaches Mars. The first device is a supersonic inflatable aerodynamic decelerator (SIAD). This durable pressure vessel will be filled with nitrogen and covered with layers of heat resistant materials. The SIAD would inflate around the entry vehicle and slow it from Mach 3.5 or greater (that’s faster than 2,600 mph) to Mach 2 or lower. Next, a 100-foot-diameter parachute would be deployed to further slow the entry vehicle to subsonic speeds.

The new technology is expected to increase the capabilities of future Mars exploration by improving landing accuracy, allowing for bigger payloads, and opening new possibilities for where we can land on Mars. At this time NASA isn’t considering these systems for the next mission to Mars in 2020, but LDSD could be used to help retrieve samples that the 2020 rover collects. Langley research center director Stephen Jurcyzk said this month’s LDSD test is the “first step in a many step program,” with the ultimate goal of putting humans on Mars.