Looking into the Future of Invisible Displays 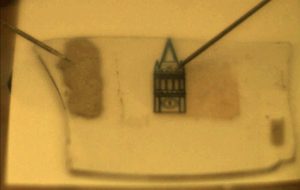 Scientists from UC Berkeley have created a new kind of bright-light emitting device. Made from a monolayer semiconductor that is a mere three atoms thick, the whole device is a few millimeters wide and becomes fully transparent when turned off. Researchers believe this small piece of equipment could be the key to creating invisible displays.

Invisible displays have long been a source of interest for scientists. These displays would be mounted on walls and windows. When powered up and fully functional, the displays would be bright and sharp. But when powered down, they would be entirely see-through. Unfortunately, this technology has always just managed to elude researchers, who were unable to come up with the perfect components. Now, recent developments in materials has changed that.

“The materials are so thin and flexible that the device can be made transparent and can conform to curved surfaces.”

Der-Hsien Lien, postdoctoral fellow at UC Berkeley and a co-first author along with Matin Amani and Sujay Desai, both doctoral students in the Department of Electrical Engineering and Computer Sciences at Berkeley

In a recent study published in Nature Communications, scientists on the team revealed how their research led to this discovery. Back in 2015, scientists published data that explained how a monolayer semiconductor is able to emit a bright-light. However, technological limitations prevented the researchers from creating a device capable of emitting light.

Now, recent advances have helped them to deal with these issues. Scaling the size of devices was key; they grew from less than the width of a single human hair up to several millimeters in size. This allowed researchers to enlarge the lateral dimensions of the device to increase the light intensity, while still keeping the overall size of the device small.

Traditionally, LEDs are made up of a semiconductor material. This material is electrically injected with positive and negative charges. When they meet, these charges produce light. And therein lies the problem: scientists have struggled to create points of contact that can efficiently inject charges. This goes double when it comes to monolayer semiconductors, due to their incredibly small size.

Although this research is a proof of concept and requires further investigation, experts believe that this is a major step in creating invisible displays.