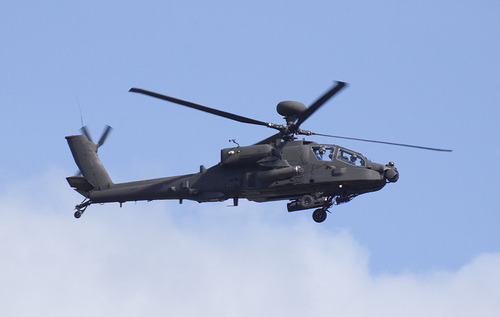 In the first phase of the project, Lockheed Martin will produce Modernized Laser Rangefinder Designator (M-LRFD) kits, which enable Apache pilots to accurately reach their targets. The company is under contract to produce and deliver 786 laser kits for the U.S. Army and international customers. “We are currently fielding laser kits as part of the M-DSA Phase 1 upgrade and are on track to equip approximately seven Apache battalions a year,” said Matt Hoffman, M-TADS/PNVS director at Lockheed Martin Missiles and Fire Control. So far, more than 200 kits have been delivered to the U.S. Army.

Phase 2, which is not yet in production, includes M-DSA upgrades that will provide high-resolution, near infrared and color imagery on cockpit displays. This second phase also includes a new laser pointer marker and a multi-mode laser with eye-safe lasing capability.

Breaking Defense also reports that Lockheed Martin is under agreement to develop a new laser weapon for the Army, although details have not yet  been revealed. U.S. military officials recently announced more plans for directed energy weapons, such as the Navy’s railgun, as well as the Army’s handheld electric ray gun and truck-mounted high energy laser.