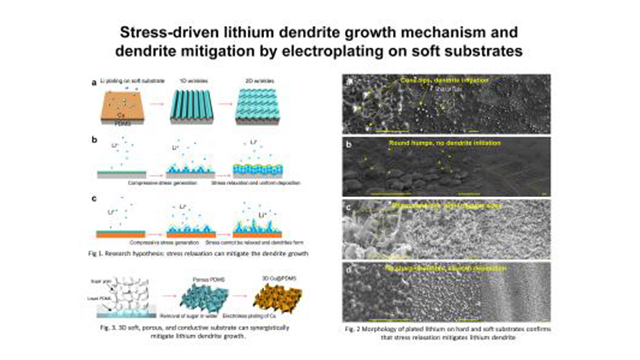 Scientists from Arizona State University and Rice University have devised an ingenious solution for dealing with lithium dendrite growth. Uncontrolled lithium dendrite growth in lithium-metal batteries can cause poor charging capability, not to mention a variety of safety hazards. This has thrown a major wrench in attempts to commercialize lithium-metal batteries — at least until now.

Using a 3-dimensional layer of Polydimethylsiloxane (PDMS) or silicone as the lithium metal anode to substrate, scientists were able to mitigate any dendrite formation. This discovery could help extend battery life while simultaneously reducing safety risks for lithium-based batteries. As if that’s not impressive enough, other metal-anode-based batteries could also be made significantly safer and more effective thanks to this work.

The key in uncovering this discovery, according to the researchers behind it, was to change their approach to the problem of dendrite growth. Instead of looking at it from a materials or electrochemical angle, they studied the problem as mechanical engineers. This means that they focused primarily on the idea that stress could be a significant factor in the growth of lithium dendrites.

Scientists started off by adding a layer of PDMS at the bottom of a battery anode. There was a significant reduction in dendrite growth, which scientists quickly learned was directly linked to stress. Stress accumulated inside the lithium metal is relieved when the PDMS begins to deform and produce ‘wrinkles.’

Besides achieving a fundamental and complete understanding of lithium dendrites and how they grow, scientists were also able to figure out a way to extend the life of lithium-metal batteries. Using the phenomenon of the lithium dendrite growth mechanism, researchers successfully extended the life of the batteries while simultaneously maintaining their high energy density. They achieved this by giving the PDMS substrate a 3-dimensional form that had a significant amount of surface.

Envision sugar cubes that contain a lot of small internal pores. Inside these cubes, the PDMS forms a continuous network as the substrate, covered by a thin copper layer to conduct electrons. Finally, lithium fills the pores. The PDMS, which serves as a porous, sponge-like layer, relieves the stress and effectively inhibits dendrite growth.

Hanqing Jiang, a professor in Arizona State University’s School for Engineering of Matter, Transport and Energy and one of the corresponding authors of the paper

These discoveries are only the beginning. Armed with this deeper understanding of lithium dendrites, researchers believe that commercialization of these batteries could soon become a reality.