Lithium-Ion Batteries Aren’t So Bad After All 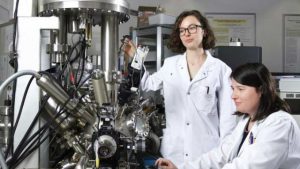 Juliette Billaud, co-first author of the new study, and Claire Villevieille, head of the battery materials research group at the Paul Scherrer Institute.

There is always healthy debate among scientists, but one thing that everyone seems to agree on is that lithium-ion (Li-ion) batteries are far from perfect. Despite their less-than-ideal performance, rechargeable Li-ion batteries are still found in smartphones, wearables, laptops, and cars. Many researchers have shifted their focus toward entirely new battery designs made from novel materials. But a Swiss research group has proven that we don’t need to rush to reinvent batteries. They have improved the performance of conventional lithium ion batteries without even changing the chemical composition.

We already have everything we need. If a manufacturer were willing to take on production, enhanced batteries could be ready for the market within one or two years.

The advance was made by materials researchers at the Paul Scherrer Institute PSI in Villigen and ETH Zurich. The study is described in a paper that published in Nature Energy this week. Instead of starting from scratch, the researchers checked existing components to make sure each part of the battery was optimized. They discovered that a Li-ion battery’s graphite anode (negative electrode) could be improved. Conventional anodes are made from flakes of graphite that are compressed together in a random arrangement. The researchers discovered that this cluttered design was making it difficult for ions to move throughout the battery, which made the entire battery inefficient.

To fix this, the researchers used magnets to arrange graphite flakes like books on a shelf: in an organized, parallel pattern. This neat arrangement gave the lithium ions freedom to flow quickly and easily, which improved the battery’s performance and increased its storage capacity. In a laboratory setting, a redesigned battery performed three times better than a conventional one, which the researchers estimate will translate to a 30-50 percent improvement in commercial batteries.