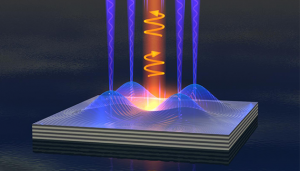 A group of researchers from the University of Cambridge have built an energy efficient, miniature, electro-optical switch for semiconductor microchips. Using a form of liquid light and an external electrical field, the team has created a semiconductor switch that can convert electrical signals to optical signals. This development could potentially enable the development of faster and more efficient electronics.

Currently information processing occurs as the electrical charges move around the semiconductor chip. The information is then transmitted as flashes of light are channelled down optical fibres. To improve processing and transmission speeds, and in following Moore’s Law, more transistors would need to be incorporated within the semiconductor chips. However, as the demand for smaller electronic devices grows this is not a pliable option so the scientists at Cambridge set out instead, to bridge this gap. The results of their findings were published on August 8, 2016 in the journal Nature Materials online.

The switch uses a new state of matter called “Polariton Bose-Einstein Condensate” to mix electric and optical signals with minimal energy consumption. To generate this unique condensate, laser light is reflected between mirrors, spaced just slightly apart, and interacts with slabs of semiconductor materials. This produces polaritons, a combination of photons and excitons. The large number of polaritons within the single small space induces condensation and forms a liquid-matter fluid that can spin clockwise or counterclockwise. Using an external electric field the spin can be controlled so that as the light is emitted from the polariton fluid, electrical signals are converted to optical signals.

“The polariton switch unifies the best properties of electronics and optics into one tiny device that can deliver at very high speeds while using minimal amounts of power.”

The team believes their work will increase the power and efficiency of common electronics, and could serve as a foundation for the future of signal processing and information technologies. Currently, the technology has only been proven in cryogenic temperatures and the team is working to develop materials suitable for ambient temperatures prior to commercialization.