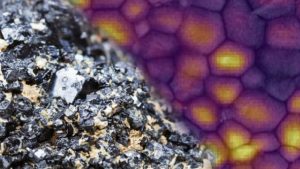 A perovskite sample is shown in the foreground, while behind it is an image the researchers used to prove the effects of intense light on a thin film. Fluorescence imaging shows that areas that received more light became more purified, as revealed by brighter fluorescence from those regions.

We previously reported that perovskite solar cells could be healed by the dark, and now the latest research shows that the opposite is also true. A new study by MIT researchers and colleagues from institutions in Massachusetts, Washington state, and the United Kingdom concludes that intense light can heal certain defects in perovskites. This realization helps scientists gain a deeper understanding of how these materials function in solar cells. Perovskites—inexpensive crystals with excellent electrical properties—are expected to be used in commercial solar cells as soon as next year. While perovskite solar cells have enormous potential, they are still an emerging technology that isn’t fully understood yet.

This is the first time this has been shown, where just under illumination, where no [electric or magnetic] field has been applied, we see this ion migration that helps to clean the film. It reduces the defect density.

Perovskites often have tiny defects in their structure that can make them inconsistent and less efficient than they could be. These defects, called electronic traps, can cause electrons to recombine with atoms before their motion can be harnessed. When the researchers shined intense light at a perovskite sample, iodide ions moved away from the light, carrying nearby defects along with them. Basically, intense light can purify the material. Unfortunately, the effect is only temporary, so the next challenge is finding a way to make it last. The researchers describe their discovery in a paper, “Photo-induced halide redistribution in organic–inorganic perovskite films,” which published in Nature Communications in May 2016.