What Happens When Lightning Strikes a Nuclear Weapon? 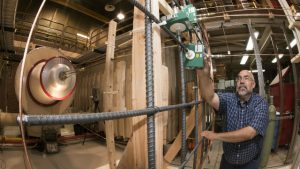 Intentionally zapping nuclear weapons with lightning sounds dangerous, but it’s actually a safety precaution. Researchers at Sandia National Laboratories perform tests to ensure that stockpiles of nuclear weapons will remain safe even if lightning directly strikes the weapons. Testing helps confirm and improve electromagnetic computer models that predict how a nuclear weapon system would react if it were hit by lightning.

Sandia’s primary mission is to assure an ‘always/never’ operating condition for nuclear weapons. They must work when authorized and never function otherwise. Direct strike lightning is a threat in the ‘never’ scenario.

Operators in a control room at Sandia’s Lightning Simulator laboratory charge and fire a machine that creates a lightning pulse by discharging high-voltage capacitor banks known as Marx generators, which are contained in two high-voltage tanks filled with insulating oil. The machine can produce lightning currents of up to 200,000 amperes to find out what would happen if lightning strikes near a nuclear weapon system or if it hits a weapon directly. For direct tests, the simulator is connected to an object or arcs to it to simulate a lightning strike. Indirect tests allow researchers to study how magnetic fields generated by a nearby strike could affect objects.

During the tests, data flows into a room that has walls built to screen out electromagnetic waves that would interfere with diagnostic recorders. Fiber optic transmitters send information from the experiment into the room’s fiber optic receiver, where data is converted into an analog signal that can be viewed on an oscilloscope for analysis. “We try to understand how much energy, in terms of voltage and current, penetrates a weapon due to direct strike lightning,” said Roy Jorgenson, a computer scientist specializing in electromagnetics at Sandia’s labs.