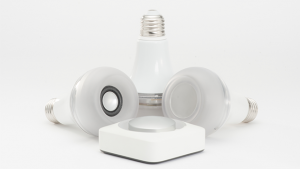 While there are billions of “Internet of Things” (IoT) devices that promise to make our homes smarter, many of these gadgets are cumbersome and require permanent installation. With this in mind, one tech-savvy apartment dweller has created a smaller, simpler device for homes. Shaun Springer accumulated several pricey electronics while he worked as a programmer for Crestron Electronics, a home automation company. However, he couldn’t use the devices in his tiny New York apartment rental because they were too big, too loud, and too permanent. So he sold his equipment and started a new company called Astro. Now, a year later, Springer’s company (backed by venture capitalist funding) is taking pre-orders for Twist, an LED light bulb with a built-in speaker.

Twist isn’t the only light bulb with a speaker, but it’s one of the first and it could be the best. Similar products use Bluetooth to pair devices, but Twist uses Apple’s AirPlay technology to stream music through a Wi-Fi connection. The LED bulbs, which last up to 15 years, automatically adjust from a cool blue to a warm yellow throughout the day to resemble natural daylight. The best feature is Twist’s simplicity. To install the device, users just screw it into an existing light socket and use an app for the initial setup.

The company is working on a few improvements—making the device Android-compatible, or adding the ability to set a schedule for the lights, for example—but Springer plans to keep the no-frills design a top priority. “Motion sensors and leak detectors don’t matter to me,” he told Macworld. “Apartments and renters have very different demands.” A starter pack with two LED bulbs, a speaker bulb, and a handheld dimmer switch costs $399, although it is currently discounted to $249 to encourage early sales. Twist will ship in early 2016.