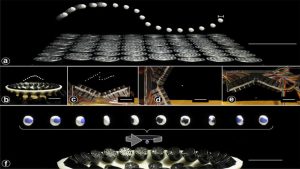 Scientists have created a sonic hologram that can move objects in thin air. The “sonic tractor beam” can pull, push, and spin objects without touching them. The researchers hope the new technology can eventually be used in medical applications, such as targeted drug delivery or sound-controlled micro-machines.

The technology takes advantage of the fact that sound waves produce force. This concept has previously been used to put out fires with sound. It has also been used for levitation, but never before with this kind of control. The new method harnesses the force of sound by using specific patterns of sound waves to change pressure zones and control objects. The scientists, from England’s University of Bristol and University of Sussex, ran computer simulations to find the right patterns of sound waves to produce a combination of a low-pressure region surrounded by high-pressure zones. They created one acoustic force field that works like tweezers, grabbing objects in thin air. Another captures the object in a bottle-shaped trap, and a third lifts objects in a vortex.

To demonstrate their concept, the researchers used used a tiny array of 64 mini loudspeakers made by Bristol spin-off company Ultrahaptics. Then they produced patterns of sound waves (well above human hearing range) to levitate tiny balls of the lightweight material used in packing peanuts. To use the system in medical applications, the technology would have to be miniaturized, which the researchers say would simply inolve using higher-frequency sound waves.