Leveraging the Principle of the Hall Effect to Boost Radio Signals 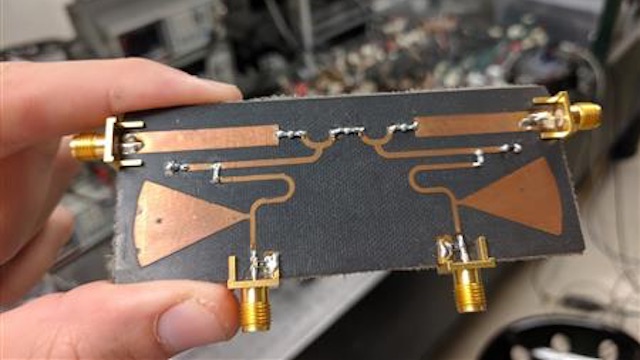 The University of Illinois at Urbana-Champaign

A team of researchers from the University of Illinois at Urbana-Champaign has successfully created a synthetic Hall effect, one of the most well-known electromagnetic effects found in physics, by using radio waves. By replicating the Hall effect, the researchers hope to create an advanced communication system capable of simultaneously boosting a signal transmission in one direction and absorbing another signal going in the opposite direction.

The Hall effect was discovered by Edwin Hall back in 1879. It occurs thanks to the interaction between electromagnetic fields and charged particles. The electrons in an electric field endure a force that is opposite to the actual direction of the field; on the other hand, in a magnetic field the force these electrons experience occurs perpendicular to the magnetic field, as well as to the motion of the electrons themselves. When these two forces combine, the end result is the Hall effect. This means that magnetic and electric fields that are perpendicular join together to create an electric current.

Researchers used synthetic magnetic and electrical fields to generate a current of light. These synthetic fields are unique, as they can affect light much in the same way a normal field would affect electrons. The creation of synthetic fields is somewhat different from their conventional counterparts, as they are constructed by changing the structure that light moves through in time and space.

“Although radio waves do not carry charge and therefore do not experience forces from electric or magnetic fields, physicists have known for several years that equivalent forces can be produced by confining light in structures that vary in space or time.”

The team created a specially designed circuit to enhance the interaction between the radio waves and the synthetic fields. Then, they leveraged the principle of the Hall effect to boost radio signals going in one direction while simultaneously stopping and absorbing signals traveling the opposite way.

Researchers will continue to investigate the power of these synthetic fields and to determine if this work could lead to a new range of communication devices that protect sources of radio waves from potentially harmful interference.