LEDs Made from Food Waste 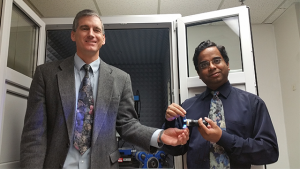 The list of ways engineers have turned trash into treasure just continues to grow. Over the last year, engineers have turned garbage into batteries, fuel, supercapacitors, and now—LED lights. Two engineers at the University of Utah created the building blocks for LEDs (light emitting diodes) from food and beverage waste. The benefits are twofold: the new method takes advantage of material that would otherwise be wasted, while also reducing the toxic elements in traditional LEDs.

In the experiment, the engineers turned waste material into quantum dots (QDs), which are luminescent nanocrystals that can be used to make LEDs (they are especially popular for making the newest televisions). Specifically, the team refined bread, tortillas, and soda into carbon dots (CDs) to create LEDs. First, the food and drinks were placed into a solvent under pressure and high temperature until CDs were formed. Next, the engineers had to determine the size of the dots, which correlates to their intensity of color and brightness. This was especially challenging since they are so small—you could fit 4,000 of CDs on the width of a human hair. To observe and measure the dots, the team illuminated them and performed several tests: Fourier transform infrared spectroscopy, x-ray photoelectron spectroscopy, as well as Raman and AFM imaging. Finally, the best CDs were suspended in epoxy resins, heated and hardened to solidify them for practical use in LEDs.