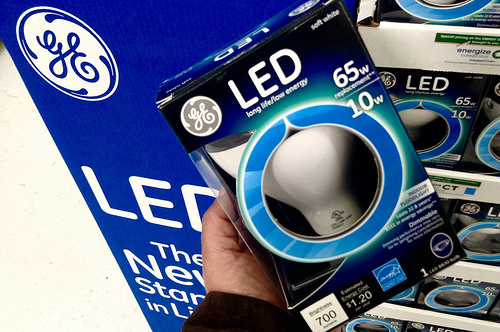 Light emitting diode (LED) technology lasts longer than fluorescent or incandescent lighting and is far more energy efficient. If home owners switch from traditional bulbs to LEDs they could save money and help the environment. Still, many people haven’t adopted LEDs yet because even though they save money in the long term, the upfront costs of LEDs are too expensive to compete with cheaper options. Now, engineers from Florida State University (FSU) have developed new LED technology that could bring manufacturing costs down enough to entice more people to replace their old lights with LEDs.

“It can potentially revolutionize lighting technology,” said FSU researcher Zhibin Yu. “In general, the cost of LED lighting has been a big concern thus far. Energy savings have not balanced out high costs. This could change that.” Traditionally, LEDs are made by using four or five layers of materials on top of each other. Yu’s team developed a new material made from a combination of inorganic and organic materials that dissolve and can be applied like paint. This new material shines a red, green or blue light and only requires one layer, which makes manufacturing LEDs simpler and could lead to cheaper products for consumer. Looking ahead, Yu’s team will continue to work to improve the technology, with an end goal of creating stretchable, active-matrix organic LED screens.