Lasers and Microwaves for Quantum Computing 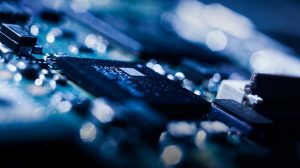 A new technique from researchers at Penn State University demonstrates that atoms could one day become the building blocks of circuits in quantum computers. The team squeezed more quantum computing power into a smaller space and with greater control than ever before. Lead researcher David Weiss says:

Our result is one of the many important developments that still are needed on the way to achieving quantum computers that will be useful for doing computations that are impossible to do today, with applications in cryptography for electronic data security and other computing-intensive fields.

Weiss and his team used a combination of laser light and microwaves to precisely control the switching of individual qubits (atoms in quantum states) from one quantum state to another without altering the states of nearby atoms. While today’s computers only operate with ones and zeros, each of the qubits has the ability to be in more than one state at the same time. The new method could provide an important building block as researchers continue to work toward achieving quantum computers with enormous processing power. The laser-microwave technique is described in a paper titled “Single-qubit gates based on targeted phase shifts in a 3D neutral atom array,” which published in Science on June 24.