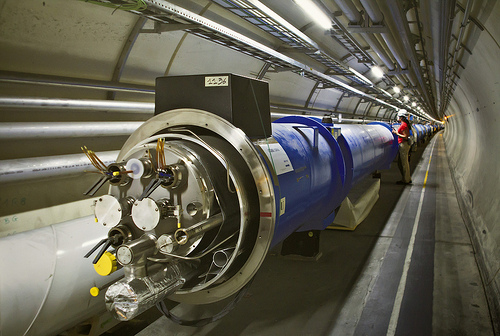 Although a short circuit delayed the relaunch of the Large Hadron Collider (LHC), it started up again on April 5, and on Thursday night it successfully accelerated a beam at a record 6.5 teralectronvolts (TeV). The CERN team is now testing and optimizing the LHC in order to further increase the intensity and energy. They will spend the next several weeks gradually increasing the energy of the beams by using the machine’s radiofrequency system and ramping up the current in the magnets.

In a release, CERN said they are taking a cautious approach, and so far the machine is behaving as expected. “We are now circulating a single bunch of protons, and using it to test our many subsystems,” said Mike Lamont of the LHC operations team. “The bunch currently contains about 5 billion protons. When the LHC is ready, we will increase this number to the nominal bunch population of about 120 billion protons per bunch, and focus on fine-tuning the machine for collisions.”

When the LHC operates at full power, the collisions are anticipated to reveal new particles that could answer fundamental scientific questions about the dark matter and dark energy that make up most of the universe.